The brief given in Melbourne FMD Architects requested space to display three tapestries made by the client’s mother. The architects used it as a starting point for their design.

â€œOur design strategy is always to celebrate the idiosyncrasies of the project,â€ the team explained, â€œthus, while exploring the tradition of tapestry and tailoring techniques, the concept of sewing the new old-fashioned shape has established the design approach. “ 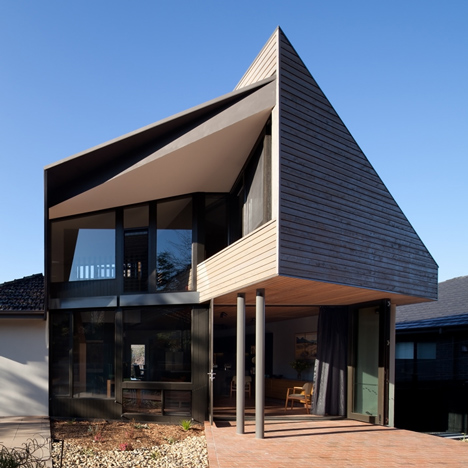 Wooden columns and beams are installed along one side of the building, framing both the wall and the slope of the roof. The result is a series of linear protrusions meant to look like stitches.

At the junction between the house and the extension, these wooden elements flourish around a column and create the framework of a skylight.

At the other end, they extend into the garden to enclose a patio and a small swimming pool – similar to another Melbourne extension by architect Andrew Maynard, and one in Spain by architectural duo Anna and Eugeni Bach .

Some of the beams fold back to create louvers through the glazed end wall, and one creates an arch at the rear entrance to the site.

â€œThe wooden beams form the thread that connects the living room to the existing house and then beyond to the west courtyard,â€ the architects said. “The wooden beams converge into a large wooden column, reminiscent of a coil wire.”

â€œIn the yard, a mirror is strategically positioned at the end of the wires to expand the space and create a sense of disentangling,â€ they continued.

“The wood threads twist on the west facade to shade the living room, which will soon be invaded by greenery.”

Wooden fittings have been added throughout the space, matching the stitching elements. They include a triangular profile kitchen counter and an angular drawer cabinet.

In the existing house, a generous skylight has been created to bring daylight into the master bedroom and the bathroom. The wooden details of these rooms resonate with those of the living space.

“What used to be a damp, dark Victorian patio has now grown into a series of spaces that have a strong connection to the outdoors, providing ever-changing natural light, as well as natural ventilation and cooling,” added the company.

The photograph is by Peter Bennett.